The National Sporting Library & Museum in Middleburg, Virginia, is dedicated to preserving, promoting, and sharing the literature, art, and culture of equestrian, angling, and field sports. 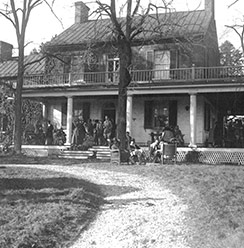 The National Sporting Library (NSL) was founded in 1954 when four sportsmen pooled their collections of sporting books: George L. Ohrstrom, Sr., Alexander Mackay-Smith, Lester Karow, and Fletcher Harper. Mackay-Smith was editor at The Chronicle of the Horse for many years, penning books and articles on a wide variety of sporting topics. Harper was MFH of the Orange County Hounds for over three decades, navigating the transformation of the countryside between Middleburg and The Plains into optimal foxhunting territory. Karow, originally from Savannah, Georgia, spent much of his year in and around Middleburg participating in the area’s vibrant sporting culture. Ohrstrom, Sr. was deeply involved in fox hunting, but passed away within one year of the Library’s founding. His son, George L. Ohrstrom, Jr., took up the torch and was a driving force for the development and growth of the NSL for the next fifty years.

The original home of the National Sporting Library was Middleburg's historic Duffy House (built circa 1820) at 11 W. Washington Street. The Library was housed there from its founding in 1954 until 1969, when NSL and the weekly magazine The Chronicle of the Horse relocated to Vine Hill, a Federal-style family home constructed in 1804. Vine Hill was split between The Chronicle of the Horse offices on the first and second floors and the NSL with a reading room, stacks, and a book storage vault in the basement of the historic house.

Between 1969 and 1999, the NSL continued slowly growing its collections. Book collectors and sporting enthusiasts across the country donated books from their collections to the Library, and those donations were noted each week in The Chronicle. In the 1980s, Vine Hill was rearranged to accommodate the steady growth of the NSL collection, with some first-floor space allocated to a Library Reading Room and the bulk of the collection stored in the basement. During this period, visitation to the Library numbered between 20 and 50 individuals per year.

In 1994, John H. Daniels, a member of the NSL Board of Directors, donated his 5,000-volume collection of sporting books to NSL. The collection included rare and antiquarian books accumulated over a 20-year span. To accommodate the addition of the Daniels collection, the NSL Board of Directors chose to construct a new Library building. At the same time, a new office building would be constructed for The Chronicle of the Horse, which opened in 1998.

The new Library opened in 1999 displaying artwork from its growing art collection throughout the building. NSL also started organizing fine art loan exhibitions in the Founders’ Room and a variety of exhibitions of art and ephemera from its collections and on loan in the Forrest E. Mars, Sr. Exhibit Hall.

The Library continued to see a period of sustained collection growth across all its collections, and by 2008, the NSL Board of Directors had embarked on a bold new direction for the organization: the establishment of a fine art museum dedicated to the history and appreciation of sporting art. One of the impetuses for this was a 2002 promised gift of fifteen paintings from the collection of Felicia Warburg Rogan. The Felicia Warburg Rogan Art Initiative was created in her honor to encourage others to do the same, and generous donors heeded the call.

An extensive renovation of Vine Hill was undertaken to expand the structure to 14 exhibition spaces. In 2010, NSL rebranded to the National Sporting Library & Museum (NSLM), and in following year the Museum opened with its inaugural exhibition, Afield in America: 400 Years of Animal & Sporting Art.

Today, the NSLM Library houses 20,000 volumes, historic periodicals dating back to the early 19th Century, over 80 archival collections, and an outstanding variety of antiquarian titles dating back to 1523, stored in the Library's F. Ambrose Clark Rare Book Room. Almost every object in the Library collections was donated to NSLM, making the Library a reflection of the sporting community across the United States.